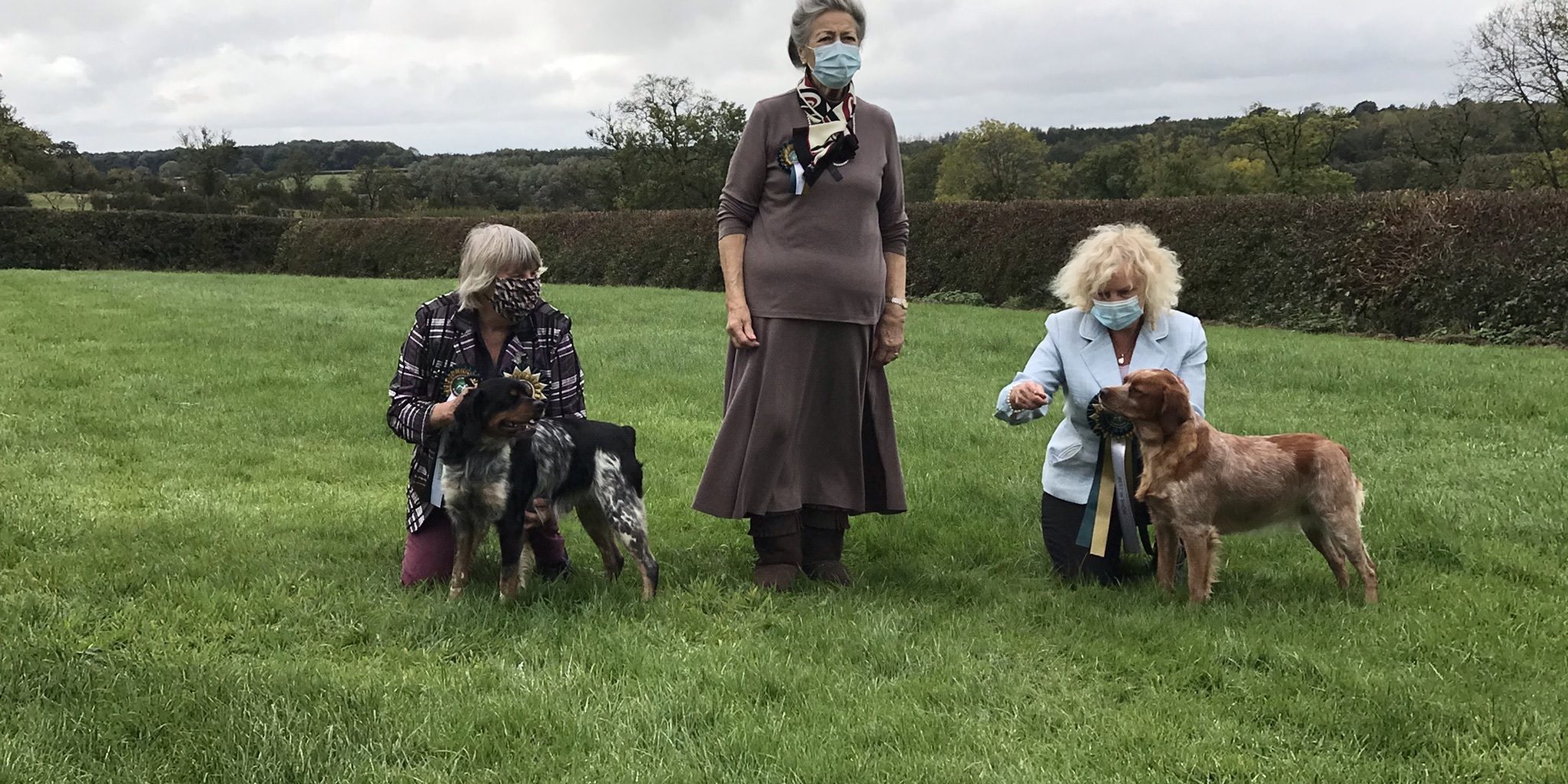 The Brittany Club of Great Britain became the first breed club to hold a championship show since Crufts. The article below was written by the show manager and COVID safety officer, Peter Barnaby.

On Sunday 4th October 2020 the Brittany Club of Great Britain held their Championship Show at Tomlinsons Boarding Kennels in Markfield near Leicester. From an entry of 26 with 4 absentees the Judge, Carol Coode (Warringah) awarded dog CC & Reserve Best in Show to Mr and Mrs Anderson’s Rochus Noble with the reserve dog CC being awarded to Miss Cook’s Sh Ch Highclare Only One Avec Tailliside (AI) JW. Bitch CC and Best of Breed went to Mr and Mrs Yarrow’s Sh Ch Bonapartist Odile with the reserve bitch CC also being awarded to Mr and Mrs Yarrow, this time with Sh Ch Bonapartist Linnet. Best Puppy in Show was the male Bonapartist Pickpocket owned by Mrs Graham and Mrs Yarrow. The Best Veteran in Show went to the bitch, Sh Ch Rochus Jayricnbrits Hattie owned by Mr and Mrs Anderson. During the lunch interval, the specials classes were judged by Miss Jenna Cocking (Ruskinite). The principal winners from an entry of 18 with 4 absentees were (Yearling) Mrs Graham & Mrs Yarrow’s Bonapartist Pickpocket, (Special Beginners) Mrs Southorn’s Rochus Nelke, and (Open) Mrs Southorn’s Sh Ch Rochus Juliet.

The show had previously been postponed from July this year and rescheduled for October in the hope that the Covid-19 situation would have improved. Although Covid-19 has not gone away it was decided that with some extra safety measures put in place the Club could still hold the show this year and give owners and members something to look forward to and add some normality again to their dog showing hobby.

After confirming that the judges and venue were still happy to judge and host the show the Club secretary, Jenna Cocking set about compiling a comprehensive risk assessment, including the standard risks of any show and the heightened risks of the current pandemic. The risk assessment was sent to the local authority (of the venue) who along with the police and public health agreed that the show could go ahead and would be classed as COVID-secure. With the help of the team at Fosse Data, the risk assessment was made publicly available to those wishing to enter for them to make their own decision as to whether the show would be safe for them given their own circumstances.

As a minor breed in the gundog group, an entry of 26 was lower than a normal breed Club championship show but higher than average (pre-COVID) for most other UK championship shows where CC’s are awarded. The judges had a good selection of dogs with most of the major kennels in the UK represented.

The show hall was set up in the morning with Club specific signage added to those already provided by the venue. Additional measures put in place included a one-way system in and out of the hall and some “no loitering” areas to avoid pinch points near the doors, although due to the size of the venue in relation to people these were not required in reality. Additional hand sanitisers were added to those provided by the venue and well used by those attending the show. The UK Government Test and Trace scheme was implemented with exhibitors and visitors encouraged to fill out the online form prior to arrival, fill out a paper form at the venue, or if they have the NHS Covid app on their phone “check-in” using the QR code provided for the show.

Initially, it was thought the show would be judged outside in the luscious paddock available at Tomlinsons, but with an amber weather warning in place for the area, it was decided on the morning of the show to switch to the wet weather ring inside. The ring was set up in the far end of the hall to limit the chance of social distancing infringements. Even tucked away in the corner there was almost 100 square metres for the exhibits to show off their unique movement.

Prior to judging a brief announcement was made by the show manager including all the safety measures for the show and then drawing attention to the additional measures in place for COVID such as wearing face masks in the venue, keeping 2 metres apart, and maintaining social bubbles of six or less. I am pleased to say all the exhibitors adhered to these requests and there was still a nice chatty backdrop in the venue as people caught up with friends they hadn`t seen since Crufts.

At 10.30 judging commenced with the first class being called in, with exhibitors being reminded about staying 2 metres from other exhibits. As per current requirements, the exhibitors showed the bite of their dog upon the judge’s request, the remainder of the hands-on examination and movement of the exhibit was as you would expect. Between each exhibit, the judge sanitised their hands using either the gel or wipes made available. After examining each exhibit in the class, the dogs were placed as normal and critique notes were made.

The steward’s role changed slightly compared to a normal show. Exhibitors collected their ring numbers from the catalogue table on entry to the venue, rather than being handed them at the start of the class. The stewards no longer handed out place cards and rosettes to the exhibitors, instead these had been pre-arranged on a table for the exhibitor to collect on leaving the ring. Subsequent classes were not called into the ring until the critiques had been completed for the previous class, something quite alien to anyone who stewards regularly but it prevented any pinch points at the ring entry point. The stewards were also unable to help the judge by passing the judging book or collecting award slips, the latter being put in a plastic wallet by the judge for collection by the secretary at the end of the show, the absence of the award board also stopping another potential gathering point.

With unbeaten dogs being called back into the ring, the judge made her decision with exhibits being moved around the ring as normal but minimal additional hands-on contact to prevent potential cross-contamination. The CC winner was called forward to receive their award but rather than the customary handshake the judge instead (unprompted) offered a celebratory ‘elbow bump’!

After judging of the specials classes and the remaining bitch classes it was time for Best in Show where once again the judge used her eye for movement rather than additional hands-on inspection, in fact by this point the show was starting to feel like shows of old and you forgot everyone was wearing face masks and keeping their distance from one another.

The show closed at 2.30 after photographs had been taken of all the principal winners. There is no doubt the COVID-secure measures added additional time to the show, but I would very much hope the Kennel Club would accept this as being down to the extended class handover times and additional cleaning of tables and equipment between the two judges.

Tomlinson’s were also very accommodating with refreshments at the venue. Although the café seating was closed there was a hatch available all day with a one-way queuing system in place for people to purchase hot and cold drinks and a range of breakfasts rolls, hot snacks, cakes, and confectionery. A pre-ordered lunch was served for the judges and stewards after the show, in takeaway containers, which was taken in good humour.

Overall, I felt the show was a success and held safely for those taking part. On a personal note, I am very much looking forward to returning to the same venue in November as show manager for the Welsh Springer Spaniel Club, where the expected entry for the open show will be approximately three times higher. I feel the measures put in place for this show can be safely upscaled for that show.

Show Manager and COVID safety officer for the Brittany Club of Great Britain.